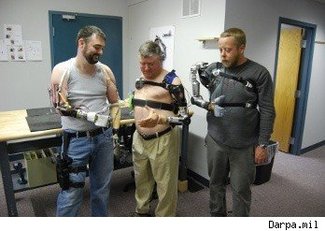 When the Defense Advanced Research Projects Agency (DARPA) was founded in 1958, its primary mission was to make the Commies stain their Party-issued boxers. The Soviet Union has since fallen, but DARPA has grown. It has matured. And, like anyone poised on the brink of manhood, it's read a lot of graphic novels.

The proof is on DARPA's Web site,where (in and amongst the parallel-computing algorithms and enhanced warfighting applications) there lurk enough genuine superhero-type projects to make Tony Stark look like, well, like Robert Downey Jr. before he was Tony Stark. Read on to see what we're talking about.

The Human Assisted Neural Devices (HAND) Program:
The mission statement claims that "by directly harnessing the ability of neural pathways to operate natural systems, the HAND Program seeks to provide means of restoring the lives of injured warfighters." Or, translated into English: "We can rebuild him. We can make him better, faster, stronger." Yes, HAND's resident mad scientist, Col. Geoffrey Ling, MD, PhD -- an expert in neurology and prosthetics -- wants to build the Six Million Dollar Man.

If used for Good, this will mean that soldiers who have lost arms and legs in the service of our country will be able to lead fuller, richer lives with artificial limbs that look and work just like the real things. Amputees will be able to return to society -- a dark day for wheelchair-basketball fans, but a bright day for everyone else. If used for Evil, legions of trained assassins will get mechanized killer fists, and professional thumb wrestling will become as rigged as the post-Paula seasons of "American Idol."

"The Z-Man Program will develop climbing aids ... [using] the technique by which geckos, spiders and small animals scale vertical surfaces." With Z-Man's "dry adhesive climbing aides," a soldier will be able to "scale a vertical surface at 0.5 meters per second while carrying a combat load," says Dr. Matthew S. Goodman, an expert in quantum technologies, who is apparently trying to reverse engineer Spider-Man.

Z-Man could mean that soldiers in urban combat zones will be able to climb walls and eliminate sniper nests on rooftops, while avoiding booby traps in stairwells and halls. But if the technology escapes into the civilian world, no condo window will be safe. Athletic pervs will hike up 12 flights to peep in on you and Janice from Accounting, and deaths from the new sport of vertical paintball will skyrocket. Word on the street is that Goodman has already been assigned to develop the ultimate Z-Man countermeasure: a 30-foot armored flyswatter.

Programmable Matter
As the DARPA folks put it, programmable matter is "a new ... form of matter, based on mesoscale particles, which can reversibly assemble into complex 3-D objects upon external command." This could be used to create working scale models of complex engine assemblies. Or an ultra-light flier that fits in your pocket. Or ultra-cool morphing ninja weapons -- because you just know that's what they're thinking -- "Programmable Matter, activate! Form of ... a lightsaber!"

The downside? Programmable matter could also revolutionize the marital-aid industry, making multiform sex toys so effective they become better than the real thing. So buy your girlfriend some flowers now, before the Programmable Matter Rabbit makes you ... irrelevant.
Proudly powered by Weebly